Can You See Me Now?

This past month has certainly filled us with so many emotions – fear, sorrow, frustration, anger…

It was quite difficult to watch the repeated images of George Floyd dying during the criminal trial of his death. Or the virus numbers going up even when more and more people are being vaccinated. Or the deaths and beatings of Asian Americans, many of whom are seniors.

For most of my adult life, I never looked at life through a lens of equity. I just assumed that everyone played life on a level playing field. But as a leader of one of California’s largest homeless services and housing agencies, I am seeing more and more people experience homelessness because their path of life was blocked by unfair policies, practices and people.

I now look back at my own tenure at PATH through a lens of equity. I remember comments that at the time I thought were just funny.

“Oh, I thought you were a PATH case manager,” many people have told me. 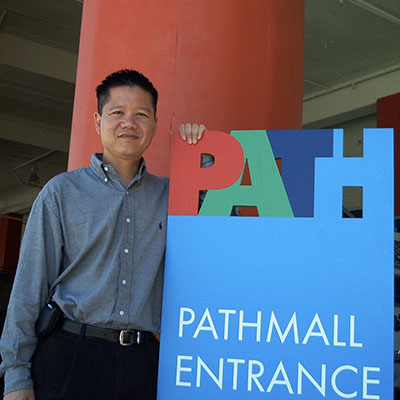 I would respond with a smile, “No, I’m the CEO.” I always looked at these comments as my way of modeling a leader who embraces humility, who doesn’t rock the boat.

But was I reinforcing the stereotypical image of Asian Americans as the “model minority”?

You would think a “model minority” means a group of people that everyone wants to be like, to become, to be part of. But with so many Asian Americans with family roots in countries that America was once at war with – Japan, Korea, Vietnam, Laos, Cambodia – do some people still look at us as the enemy?

The pandemic birthed sickening labels like “the China virus” and “Kung Flu” and certainly reinforce this other-ness. I can’t remember how many times people have asked me, “Where are you from?” as if I am a visitor from an Asian country. I would just answer, “I’m from Long Beach, California,” my hometown.

Many are saying that the “model minority” really means the minority group that stays silent, doesn’t object, doesn’t push back against society.

This reminds me of the people we serve every day. The people living on our streets. We drive by them standing at the freeway offramp, pretending they don’t exist. We walk on the other side of the street in hopes we don’t run into them.

They have no face. No voice, no life. They are not the son who was kicked out of the house for coming out. Not the guy who served two terms in a war-torn country wearing an American uniform but couldn’t handle the demons of death still swirling in his head when he returned home. Not the woman who was relentlessly abused by her partner.

No, they are not human. Not really important enough to provide a home. They are invisible. At least, to some people. Why else does our society continue to allow thousands of people to inhumanly live on our streets?

We certainly need to see through a new lens in our approach to addressing this generation’s most grave social issue – homelessness.

I see PATH as a vehicle to give people with no homes the voice they desperately need, the dignity to stand up to change a broken society, to share their tales of inequity. Ending homelessness is more than just building a home. It is breaking an unfair system, an uneven playing field, so that a new generation will not end up living on the streets.

I also see PATH as a vehicle to empower actual PATH case managers, young emerging leaders, a generation of potential leaders who encounter career barriers—perhaps because of the color of their skin, their gender identity, their age—to be able to say, “Yes, I am the CEO.”

For the people PATH helps make it home.

For the next generation of emerging leaders who want to change a fraught society that allows homelessness to persist because of unfair policies, practices and perceptions.

As for me, a CEO, I will no longer be silent, no longer be invisible when inequity affects our work to end homelessness.