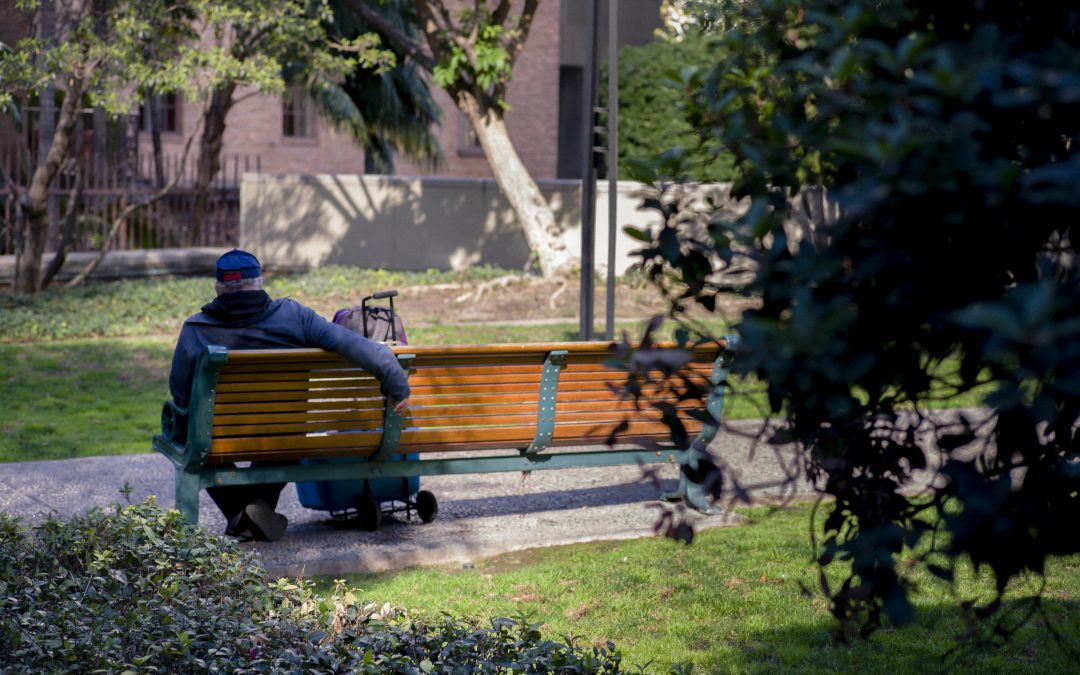 Between a large modern building and the highway is a long wide patch of grass. There could easily be another business building, but instead there are tents set up. The homeless community that resides there are quiet. Whether spoken aloud or not, these homeless folks know that they are set up in one of the most strategic places in all Los Angeles —right next to PATH. Many of the employees who go in and out of the building are on a first name basis with the unhoused neighbors that live right outside.

I work at PATH, I help as best I can, and don’t think I’m anything special because of it. It’s the people living on the street there who are amazing. Any time you see them smile, laugh, or tell a joke, it is easy to forget the difficulties, obstacles, and judgement they face. Despite their circumstances, these folks still find their way to a smile and laugh. Incredible.

I’m meeting a Veteran here today. It’s raining a bit, enough to need an umbrella. I’m holding a large black umbrella in one hand and a cup of coffee in the other. In some cases, I’d be concerned that a person wouldn’t show up with the rain and all. I always wonder where they go.

Today that is not the case. I already know this Veteran I am meeting. I helped him find a job and he will be moving into a new apartment in two weeks.

Thinking of his successes, I almost didn’t hear him walking up. He has a quiet step.

“Hey, how’s it going there bud?” he asked as he adjusted the hood of the sweatshirt he wore under is actual Army uniform. He smiled broad; I could see it in his eyes.

I remember when I had first met him, not so long ago. He noticed me noticing his army gear then– the few rips and loose threads.

“Yes, this is my authentic uniform, it’s pretty much all I have to wear. You know what’s crazy? I didn’t get these rips in my uniform in the war, this came from when I got back home with me living in the street.”

He sniffed and rubbed his nose. He knew that I knew what was going on.

“How have you been doing with that?” I asked.

He nodded his head “Yeah man, doing my best” he said.

His story was a hard one. He’d lost his parents early in life to a tragic car accident. He was placed in foster care, bouncing from house to house, nothing was ever his. He considered himself lucky, he’d only suffered mild abuses in comparison to some of the other foster children he knew. As soon as he turned 18, he joined the Army, where he was sure that he would earn people’s respect fighting for his country. Sadly, it doesn’t always work out that way.

He was in good shape and got through bootcamp with not much struggle. He had joined the Army on September 18th, 2001, seven days after 9/11. He fought to keep Americans safe from any further attacks. He’d seen it all — good friends, brothers, and sisters in arms killed in the line of duty. The injuries he suffered were mild in comparison.

As he sat on a plane back home in 2011, he reflected on his journey. He’d given ten years of his life to protect our country. He’d never given much thought to what he would do when he got back home to Los Angeles. He wasn’t worried. With the respect he earned protecting our country, he knew something would come together.

That was 10 years ago… He’d been homeless 10 years. It had only been three weeks living on the streets before he ran into one of his foster parents.

“We talked briefly; I could tell she wanted to get away from me. She walked away, stopped, turned, and said, ‘I always hoped you would turn out to be something.’ I felt pride a moment, but then she finished her statement. ‘I’m so sorry you didn’t,’” he recalled.

“She said that as I was wearing my Army Uniform. Wow. After that, I found me some dope, and started using. The last 10 years being homeless, I saw just as much tragedy if not more, in these streets—my homeland” he finished.

“You have accomplished a great deal in a short amount of time. That’s something to be proud of,” I encouraged him. He has a job, is sober, and in only two short weeks will be moving into his own home.

He smiled, “I know man, I’m right there, so close, the closest I’d ever been.” He likes working at the restaurant, and the folks who own it feel even safer having a Vet working for them.

“Can I get you a Lyft somewhere? The rain is coming down pretty good.” I said getting my phone out my pocket.

Suddenly there was a crash behind him, his head whipped quickly in the direction of the noise. A woman pushing a shopping cart filled with all her belongings dropped some old pots and pans. He rushed over to her and helped gather her belongings. He put them back into her shopping cart, tied her bundle more securely, and adjusted her blanket best he could to keep the rain off her head.

Sometimes people miss those acts, the humanity and all. The woman kept pushing her shopping cart and I handed him the umbrella. “Right on man.” I said, he smiled, I’m not entirely sure he knew what I meant at that moment.

I walked back to my car, got inside, and thought for a moment. I was going to turn off the radio, but it was Miles Davis. I looked at the rain on my windshield. I always wonder where they all go... Sometimes, it’s not red, nor white, sometimes it’s Kind of Blue.